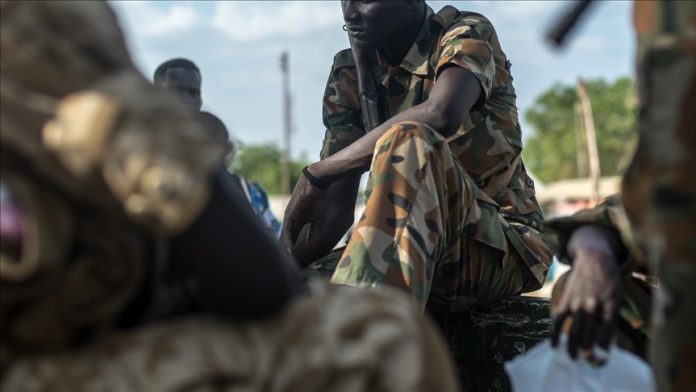 South Sudan, Sudan agree to establish joint security force to prevent entry of illegal weapons
JUBA, South Sudan
South Sudan’s President Salva Kiir and his Sudanese counterpart Abdel Fattah al-Burhan agreed Thursday to establish a joint security force to prevent the infiltration of illegal weapons.
The heads of state emphasized the importance of maintaining stability and security along their borders to promote peace and prosperity for the two countries.
Besides preventing the entry of illegal weapons, the joint security force will combat “negative forces and activities” along the border corridors, according to a communique issued by the foreign affairs ministries of the two countries following a meeting of the two leaders in the capital Juba.
The communique said the security of South Sudan and Sudan is their top priority, and as the two countries are closely intertwined, instability or insecurity within one country can spill across the borders.
“The Heads of State reaffirm that consolidating internal peace in each of their two countries is the sole responsibility of their national security forces and also recognize that a bilateral collaborative approach can help effectively address internal security issues within the two countries,” it said.
It said the two countries will establish regular meetings between their respective national security forces to share intelligence and coordinate actions to address potential threats.
The two countries expressed their conviction that they are able to address these security challenges internally. While South Sudan and Sudan will continue to discharge responsibility for their respective countries, the heads of state will engage the region as necessary.
Ambassador Mayen Dut Wol, South Sudan’s Undersecretary of the Ministry of Foreign Affairs and International Cooperation, said the two leaders discussed ways of stabilizing political, economic and security cooperation and other outstanding issues between South Sudan and Sudan.
Dafallah Al-Haj Ali, Sudan’s undersecretary in the Ministry of Foreign Affairs, said the meeting focused on ways to fast-track the implementation of the peace agreements as well as security issues and bilateral cooperation.
Source, https://www.aa.com.tr/en/africa

UNHCR is working to ensure all those who are displaced return home: Official

Climate-smart agriculture project for refugees and their hosts

In refugee camp, deadly fights have come back